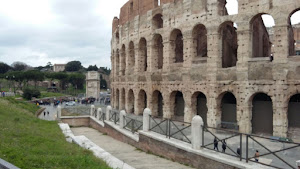 The Colosseum or Coliseum

(/kɒləˈsiːəm/ kol-ə-SEE-əm), also known as the Flavian Amphitheatre (Latin: Amphitheatrum Flavium; Italian: Anfiteatro Flavio [aŋfiteˈaːtro ˈflaːvjo] or Colosseo [kolosˈsɛːo]), is an oval amphitheatre in the centre of the city of Rome, Italy. Built of concrete and sand, it is the largest amphitheatre ever built. The Colosseum is situated just east of the Roman Forum. Construction began under the emperor Vespasian in AD 72, and was completed in AD 80 under his successor and heir Titus. Further modifications were made during the reign of Domitian (81–96). These three emperors are known as the Flavian dynasty, and the amphitheatre was named in Latin for its association with their family name (Flavius).

The Colosseum could hold, it is estimated, between 50,000 and 80,000 spectators, having an average audience of some 65,000; it was used for gladiatorial contests and public spectacles such as mock sea battles (for only a short time as the hypogeum was soon filled in with mechanisms to support the other activities), animal hunts, executions, re-enactments of famous battles, and dramas based on Classical mythology. The building ceased to be used for entertainment in the early medieval era. It was later reused for such purposes as housing, workshops, quarters for a religious order, a fortress, a quarry, and a Christian shrine.

Although partially ruined because of damage caused by earthquakes and stone-robbers, the Colosseum is still an iconic symbol of Imperial Rome. It is one of Rome's most popular tourist attractions and also has links to the Roman Catholic Church, as each Good Friday the Pope leads a torchlit "Way of the Cross" procession that starts in the area around the Colosseum.

The Colosseum is also depicted on the Italian version of the five-cent euro coin.

The Colosseum's original Latin name was Amphitheatrum Flavium, often anglicized as Flavian Amphitheater. The building was constructed by emperors of the Flavian dynasty, following the reign of Nero. This name is still used in modern English, but generally the structure is better known as the Colosseum. In antiquity, Romans may have referred to the Colosseum by the unofficial name Amphitheatrum Caesareum (with Caesareum an adjective pertaining to the title Caesar), but this name may have been strictly poetic as it was not exclusive to the Colosseum; Vespasian and Titus, builders of the Colosseum, also constructed an amphitheater of the same name in Puteoli (modern Pozzuoli).

The name Colosseum has long been believed to be derived from a colossal statue of Nero nearby[4] (the statue of Nero was named after the Colossus of Rhodes).[citation needed] This statue was later remodeled by Nero's successors into the likeness of Helios (Sol) or Apollo, the sun god, by adding the appropriate solar crown. Nero's head was also replaced several times with the heads of succeeding emperors. Despite its pagan links, the statue remained standing well into the medieval era and was credited with magical powers. It came to be seen as an iconic symbol of the permanence of Rome.

In the 8th century, a famous epigram attributed to the Venerable Bede celebrated the symbolic significance of the statue in a prophecy that is variously quoted: Quamdiu stat Colisæus, stat et Roma; quando cadet colisæus, cadet et Roma; quando cadet Roma, cadet et mundus ("as long as the Colossus stands, so shall Rome; when the Colossus falls, Rome shall fall; when Rome falls, so falls the world"). This is often mistranslated to refer to the Colosseum rather than the Colossus (as in, for instance, Byron's poem Childe Harold's Pilgrimage). However, at the time that the Pseudo-Bede wrote, the masculine noun coliseus was applied to the statue rather than to what was still known as the Flavian amphitheatre.

The Colossus did eventually fall, possibly being pulled down to reuse its bronze. By the year 1000 the name "Colosseum" had been coined to refer to the amphitheatre. The statue itself was largely forgotten and only its base survives, situated between the Colosseum and the nearby Temple of Venus and Roma.

The name further evolved to Coliseum during the Middle Ages. In Italy, the amphitheatre is still known as il Colosseo, and other Romance languages have come to use similar forms such as Coloseumul (Romanian), le Colisée (French), el Coliseo (Spanish) and o Coliseu (Portuguese).

The Colosseum was used to host gladiatorial shows as well as a variety of other events. The shows, called munera, were always given by private individuals rather than the state. They had a strong religious element but were also demonstrations of power and family prestige, and were immensely popular with the population. Another popular type of show was the animal hunt, or venatio. This utilized a great variety of wild beasts, mainly imported from Africa and the Middle East, and included creatures such as rhinoceros, hippopotamuses, elephants, giraffes, aurochs, wisents, Barbary lions, panthers, leopards, bears, Caspian tigers, crocodiles and ostriches. Battles and hunts were often staged amid elaborate sets with movable trees and buildings. Such events were occasionally on a huge scale; Trajan is said to have celebrated his victories in Dacia in 107 with contests involving 11,000 animals and 10,000 gladiators over the course of 123 days. During lunch intervals, executions ad bestias would be staged. Those condemned to death would be sent into the arena, naked and unarmed, to face the beasts of death which would literally tear them to pieces. Other performances would also take place by acrobats and magicians, typically during the intervals.

During the early days of the Colosseum, ancient writers recorded that the building was used for naumachiae (more properly known as navalia proelia) or simulated sea battles. Accounts of the inaugural games held by Titus in AD 80 describe it being filled with water for a display of specially trained swimming horses and bulls. There is also an account of a re-enactment of a famous sea battle between the Corcyrean (Corfiot) Greeks and the Corinthians. This has been the subject of some debate among historians; although providing the water would not have been a problem, it is unclear how the arena could have been waterproofed, nor would there have been enough space in the arena for the warships to move around. It has been suggested that the reports either have the location wrong, or that the Colosseum originally featured a wide floodable channel down its central axis (which would later have been replaced by the hypogeum).

Sylvae or recreations of natural scenes were also held in the arena. Painters, technicians and architects would construct a simulation of a forest with real trees and bushes planted in the arena's floor, and animals would then be introduced. Such scenes might be used simply to display a natural environment for the urban population, or could otherwise be used as the backdrop for hunts or dramas depicting episodes from mythology. They were also occasionally used for executions in which the hero of the story – played by a condemned person – was killed in one of various gruesome but mythologically authentic ways, such as being mauled by beasts or burned to death.

The Colosseum today is now a major tourist attraction in Rome with thousands of tourists each year paying to view the interior arena, though entrance for citizens of the European Union (EU) is partially subsidised, and entrance is free for EU citizens under eighteen or over sixty-five years of age. There is now a museum dedicated to Eros located in the upper floor of the outer wall of the building. Part of the arena floor has been re-floored. Beneath the Colosseum, a network of subterranean passageways once used to transport wild animals and gladiators to the arena opened to the public in summer 2010.

The Colosseum is also the site of Roman Catholic ceremonies in the 20th and 21st centuries. For instance, Pope Benedict XVI led the Stations of the Cross called the Scriptural Way of the Cross (which calls for more meditation) at the Colosseum on Good Fridays.

In 2011 Diego Della Valle, head of the shoe firm Tod's, entered into an agreement with local officials to sponsor a €25 million restoration of the Colosseum. Work was planned to begin at the end of 2011, taking up to two and a half years. Due to the controversial nature of using a public-private partnership to fund the restoration, work was delayed and began in 2013. As of 2014 the restoration is estimated to be complete by 2016. The restoration is the first full cleaning and repair in the Colosseum's history. The first stage is to clean and restore the Colosseum's arcaded façade and replace the metal enclosures that block the ground-level arches. The project plans to create a services center and to restore the galleries and underground spaces inside the Colosseum, including recreating the wooden floor that once covered the underground spaces.

Sublime. Mistreated. It should be all a car free island around here.-- Ferraro N

This beautiful landmark makes me want to come back again and again.-- Emma Perry